While there is a growing interest in cricket in Spain (mainly due to expats) it’s not yet a fully federated sport. In fact, there are now over 100 teams in Spain with only 8 junior teams playing league cricket. Given the favourable climate this might come as a surprise when you consider that the UK has over 3,000 teams and Germany now has over 350 teams.

That said, things are moving in the right direction with Cricket Espana investing heavily in the men's national team and supporting youth development for both boys and girls’ cricket. They are the sole governing body for cricket in Spain and are currently applying for federation status. This will have the added benefit of government funding, assistance with finding venues to play the game, and the ability to grant permission for the sport to be added to school curriculums. All of this presents a great opportunity for youth development. 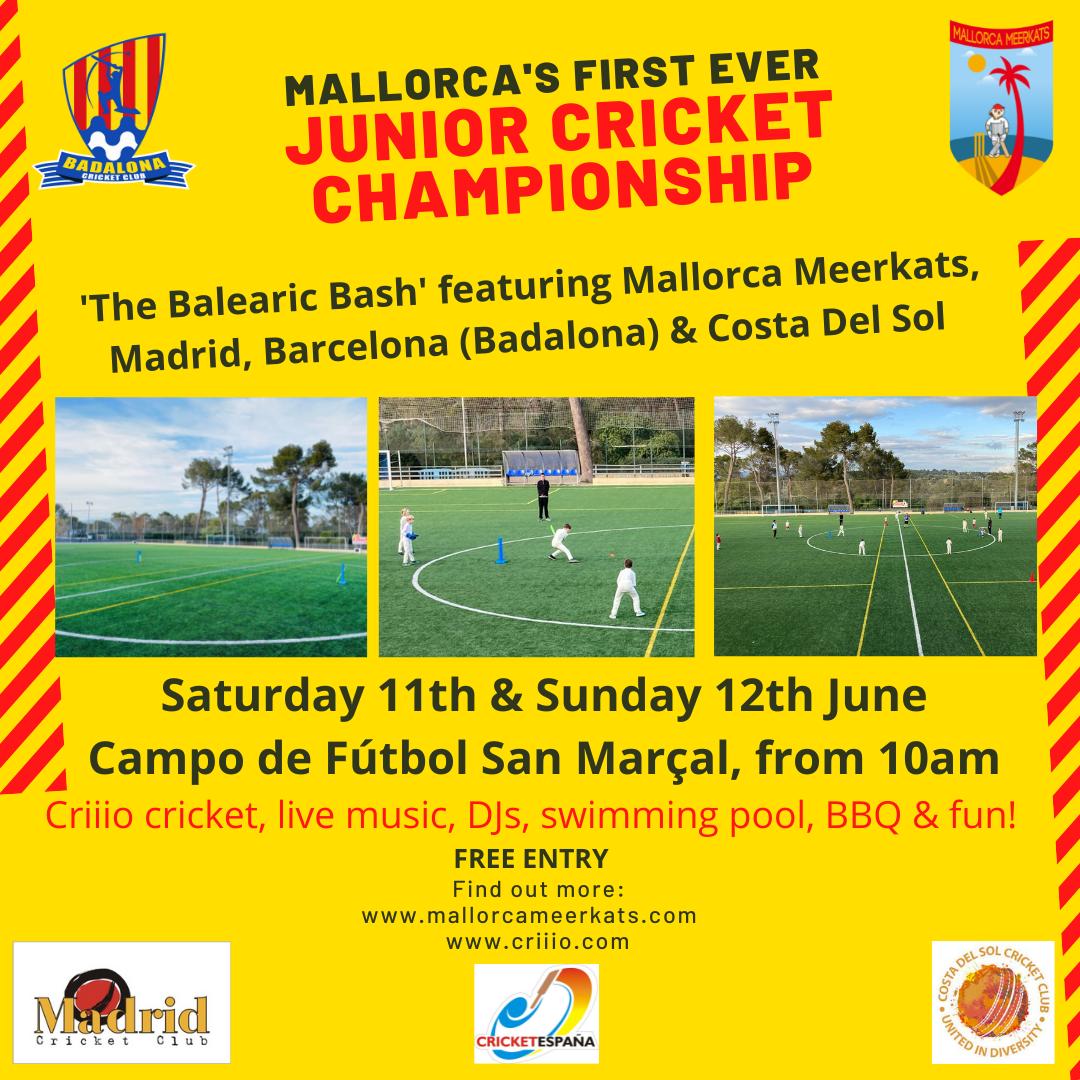 It appears that cricket is set to flourish across Spain in the coming years and this June will see the first ever junior cricket championship launch in Mallorca. The Balearic Bash is taking place on the weekend of the June 11 and 12 at Campo de Fútbol San Marçal in Portol. The tournament will be made up of 4 teams of 8 players from across Spain; Costa Del Sol, Madrid, Barcelona and the hosts Mallorca Meerkats. Each team will play each other twice over the weekend, in a league format.

Mallorca Meerkats founder, Chad Harwood-Jones, says “We are really excited to be hosting Spain’s first ever junior cricket championship here in Mallorca. Having started the club 18 months ago it’s been fantastic to watch the boys develop and we are now able to put the training into action by competing in a tournament.”

The format of games played will be the newly launched short form of cricket called Criiio, with the matches lasting just under an hour each. Each team gets to bowl 8 overs of 6 balls and every player gets a turn to bowl and bat. With 12 games across the weekend it's sure to be a busy weekend, with plenty of entertainment for the adults too. There will also be live music from Mallorca’s fun female vintage trio, The Cherry Bombs, covering today’s hits in a unique retro 40s and 50s style. This and a swimming pool open to all attendees, it’s set to be a festival of cricket.

Cricket Espana CEO, John Howden says "It is fantastic that a Junior tournament like this is taking place in Mallorca, with club and regional representation from mainland Spain. It is a testament to the hard work that is going on in Mallorca that an initiative like this is taking place in San Marcal, and we look forward to many more of these events for aspiring young cricketers in the near future"

Harwood-Jones goes on to say “Together with the senior club, we are soon to be starting a crowdfunding campaign to invest in a permanent home for cricket on the island, which is a really exciting prospect. The land and facilities are in place, we now need the funds to make the dream a reality, so the island can compete with Minorca and Ibiza, both of whom have their own ground. The juniors are the future of cricket on the island.”

How did the Mallorca Meerkats start?

I moved to Mallorca from the UK in August 2020 and started looking for a cricket club for my 6 and 9 year old boys to join. While there has long been a senior men’s club there was no junior cricket on the island. In October 2020 I booked the astro pitch at Queens College then promoted the trial training session via the schools and social media. 24 kids turned up ready to give it a go and we went from there. We ran sessions every other week for the first 18 months, breaking in the winter and peak summer months. While Queen’s is a great venue with a stunning backdrop, we needed more space, so in March 2022 we moved to Campo de Fútbol San Marçal in Portol and have been running training weekly from then. We finish at the end of June and start again in September through until the end of October, so 6 months a year in total. It’s a great venue where my children also play football and the local community has been a great support.

What can you tell us about the first junior cricket tournament to be held in Mallorca, The Balearic Bash?

The idea came about early on, when I started the club. I reached out to Cricket Espana with the idea and they put me in touch with other junior teams in Spain. Many conversations and Whatsapp groups later we have managed to organise the event. We have benefited from some financial support from Cricket Espana and a local sponsor but we are still operating on a shoestring. Hopefully we can build on this year and attract more interest next year.

We have 4 teams of 8 players entering and each team will play each other twice - so there will be 6 games each day. It’s 3 points for a win and 1 for a draw. The team with the most points by Sunday afternoon will win the trophy. We are really excited to be welcoming teams from the mainland and are looking forward to the competition. It’s a great effort from the other teams to travel to Mallorca, so we are hoping to put on a good show. Play starts at 10 am each day and will last until around 6 pm. There is music throughout the day as well as some live music at 5:30pm on Saturday. The Cherry Bombs are well worth hanging around for! The local community pool is opening the day before so there will be plenty of fun to be had throughout the weekend, and of course there is a bar and a BBQ. The tournament will conclude at 5:30pm on Sunday with a medal and trophy ceremony.

What does the future hold for the Mallorca Meerkats?

The future of cricket in Mallorca is looking really good. We are working closely with the senior men’s team to develop a permanent facility and are just about to start a crowdfunding campaign. We have the land in place with the required facilities, we just need to raise awareness and the funds to make it happen. There will be more on that in the near future, but there is the will and energy to make it happen and a lot of positive people involved. Having nets for the older juniors to practice in is vital for them to progress into the senior team, when the time is right.

We are also in talks with Madrid about travelling there next year, and Costa Del Sol also have their own facility in Malaga. Locally, Menorca and Ibiza both have their own grounds and are soon to be launching their own junior cricket programs, so there could be some competition nearer to home at some point soon.

Our club relies on volunteers and we have a great bunch of dads who support us, so a big thanks to them for helping us get this far. We are really looking forward to developing the club further.