The British billionaires who own 13 kilometres of Mallorcan coastline

They have a net worth of 22 billion pounds

They own an estimated 13 kilometres of Mallorcan coastline but it is just a drop in the ocean for David and Simon Reuben, who have a net worth of 22 billion pounds, according to the latest Sunday Times Rich List. It is unclear what plans the two brothers have for Mallorca, but they are some of the biggest landowners on the island. In the latest list they are Britain´s third richest people.

Their Mallorcan holdings are are located within Manacor, Capedera, Betlem, and overlooking the Bay of Palma. 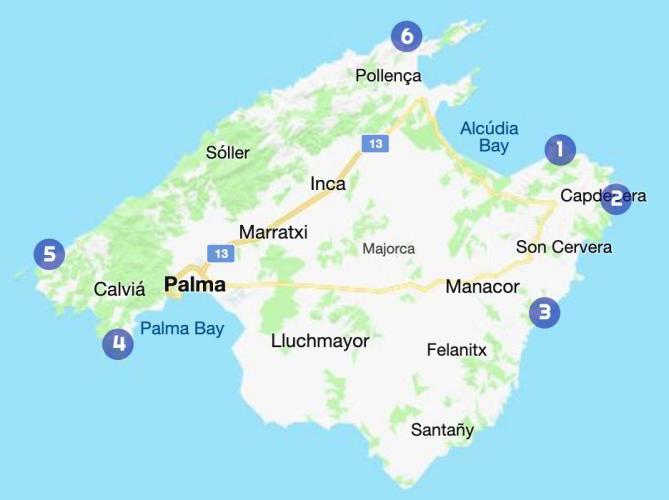 Betlem; 120 hectare (around 300 acres) plot including over 1km of coastal land. Located within municipality of Artà, featuring sandy beaches, natural caves, a lighthouse and a yacht pier.

Cala Mesquida; 215 hectare plot (around 530 acres) within the Capdepera principality including 1.3 km of unbroken seafront. The land is adjacent to the development of Cala Mesquida, and boasts several constructions including two villas with a surface area of 1,670m2.

Manacor; over 200 hectares over 2 holdings;1. 116.5 hectares (around 290 acres) consisting of 5 adjoining plots of coastal land including almost 1.5km of unbroken sea. It is close to Rafael Nadal’s residence, his Academy & Museum in Manacor and the Vall d’Or Golf Club. The land includes areas of outstanding beauty including; a beach near Cala Romantica, a natural lake and various karstic caves including, Cova del Pirata & Cova des Pont. 2. 86.3 hectares further south in Cala Antena with 2km of sea frontage

Cala Figuera; 364 hectare plot (around 900 acres) near the Bay of Palma including 5 km of unbroken seafront. The land located, boasts, wild forest, two beaches, 2,835 sq m of constructed area including a restaurant and a beach club.

Pollensa; 270 hectare plot with about 3.5km of sea frontage.

The return of the magic of Sant Joan Eve

Don't pee in the sea

Zoltan Teglas | about 1 month ago

John PatersonThat doesn't happen any more. Franco used to do that and the British royal family as well. But those days are gone

John Lynch-Cummins | about 1 month ago

The whole point about most of the land bought by the Ruben brothers is that it is all "protected" from development, classified as agricultural land and can not ever be built on. If any part of that land had been available for development, majorcan developers would have done that many years ago. Local developers would be ready to build "affordable social housing" if the local goverment made land available for that purpose. Not of course in the countryside, certainly not in environmentally protected areas but in built up areas.avai The Ruben brothers have a lifetime history of making good investments and we can be sure that they are fully aware that the land is never going to be available to develop comercially.

John Paterson | about 1 month ago

Will it be took off them, to allow affordable social housing?

Marvin Le Martian | about 1 month ago