The Academy International School encourages each student to have a global perspective and a strong awareness that global initiatives are at the heart of environmental change. This viewpoint connects entirely with the IB Diploma Programme and was one of the reasons behind choosing this course of study for our students. CAS is a core component of the IB Diploma Programme, challenging students within the different strands of Creativity, Activity and Service.

In August 2021 the school participated for the first time in Junk Kouture; a competition long established in Ireland where, for over a decade, it has created a platform for an engaged, inspired and creative community of young people eager to make a difference and raise awareness for the need to act on climate change. In 2021, Junk Kouture took its mission and message to the global arena, challenging students from all over the world to create fashion outfits from recycled junk and everyday waste. This opportunity was presented to Academy students and their response was incredible. 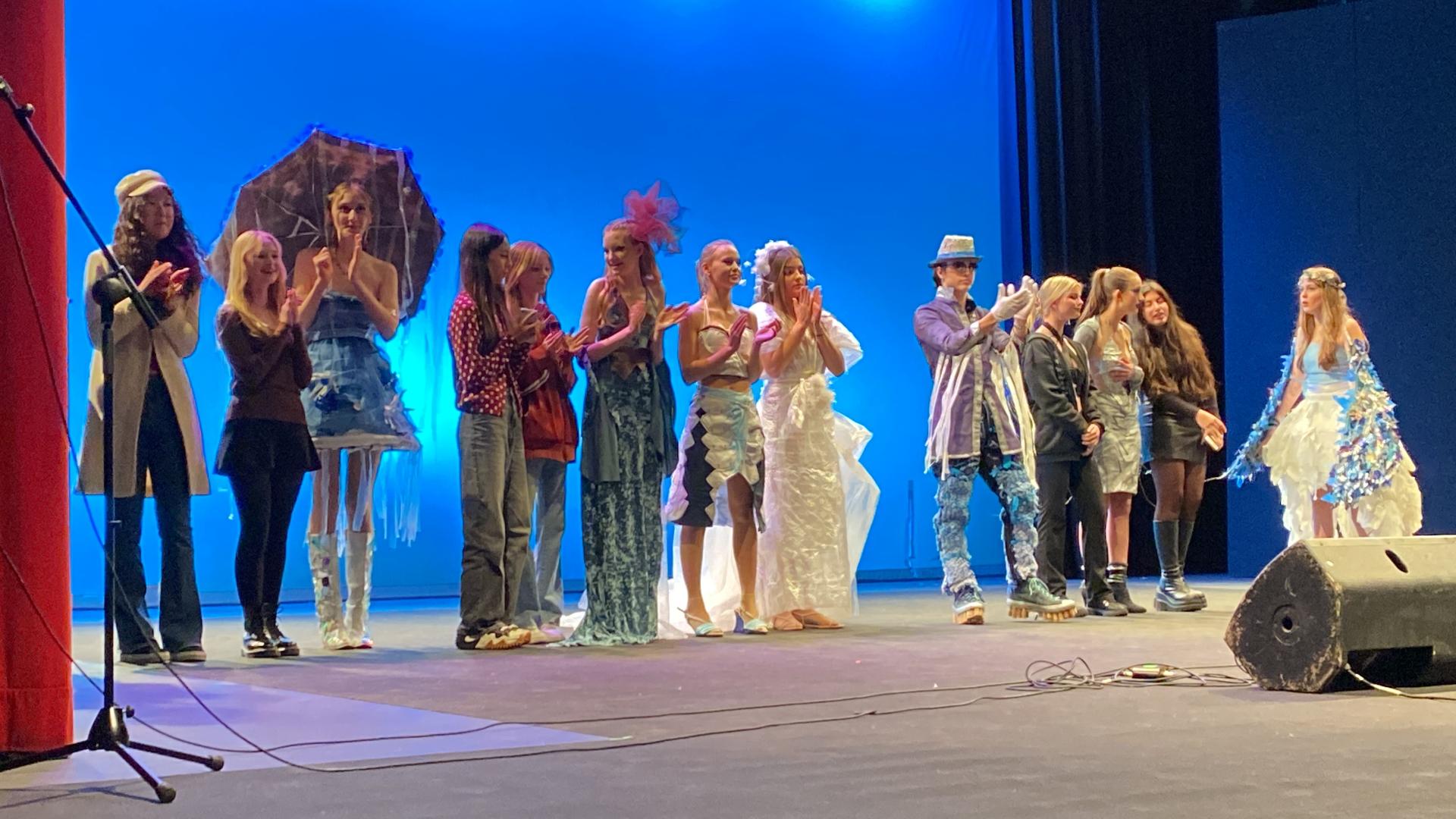 The school became a hive of activity as students formed teams and worked on designs for the national Junk Kouture final. Inspiration for their designs came from many sources; from the nature of the junk they had collected, from distinct fashion shapes and accessories, the work of fashion designers, song lyrics, from forms in nature or pure imagination and, more often than not, a combination of these elements. 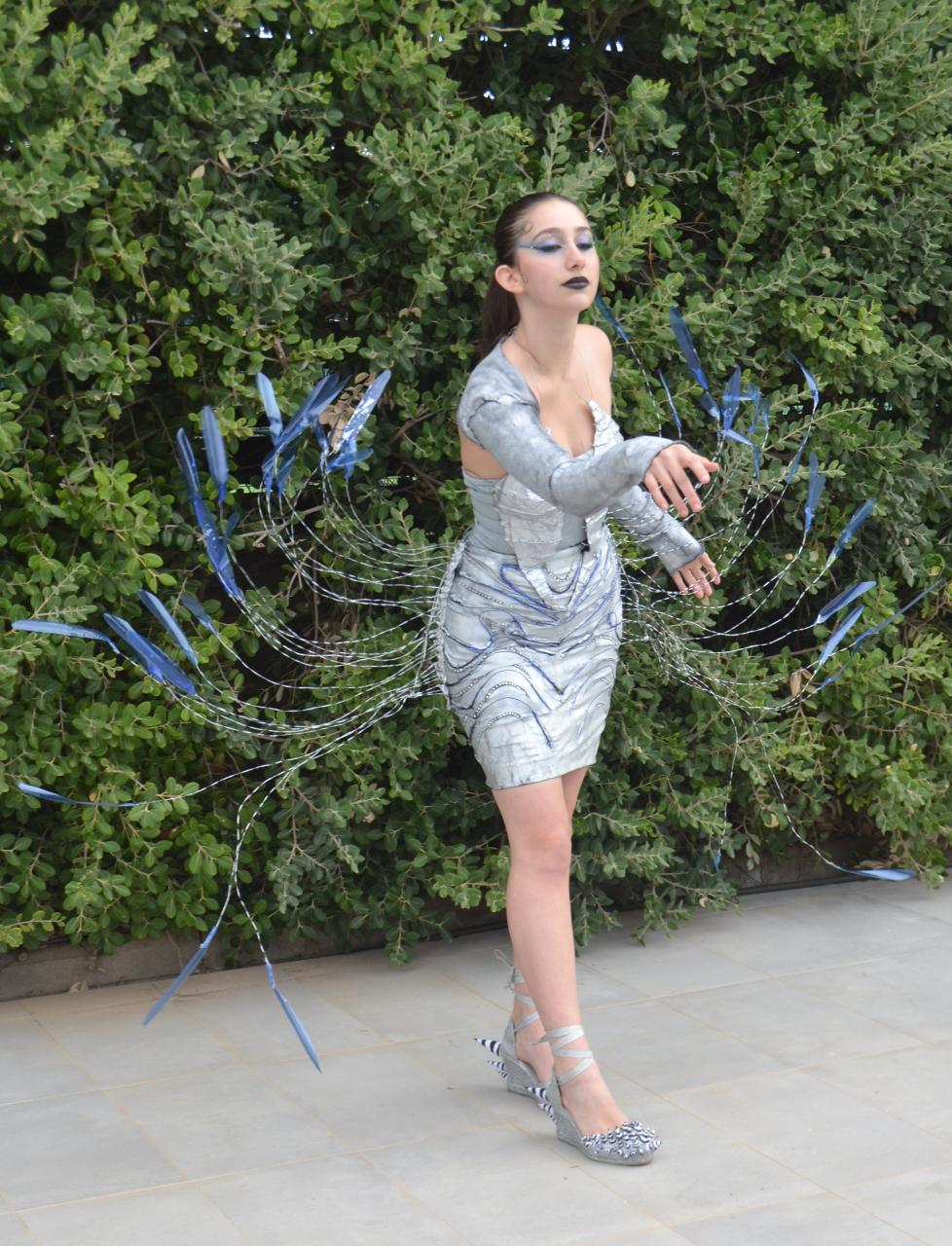 In April 2022, The Academy held its own music and fashion show at the Trui theatre and our students were able to showcase their junk fashion designs to an audience for the first time. The excitement and drama of the fashion runway was a brilliant experience for everyone involved. Teams had already enjoyed creative collaboration in the conception and construction of their designs. They now had to make creative choices about make-up, accessorizing, performance, music and the movement and sass needed to show off the specific qualities of their outfits.

Already buzzing from this spectacular event, two weeks later and we were thrilled to discover that 6 design teams from The Academy had made it through to the national Junk Kouture finals to compete with 40 submissions from schools across the country. The rollercoaster journey had begun. Excitement mounted in preparation for the live final and then just before the event was to be held it was postponed because of Covid-related problems. Fortunately the competition resumed in October 2022 with a live online final for each of the city events. 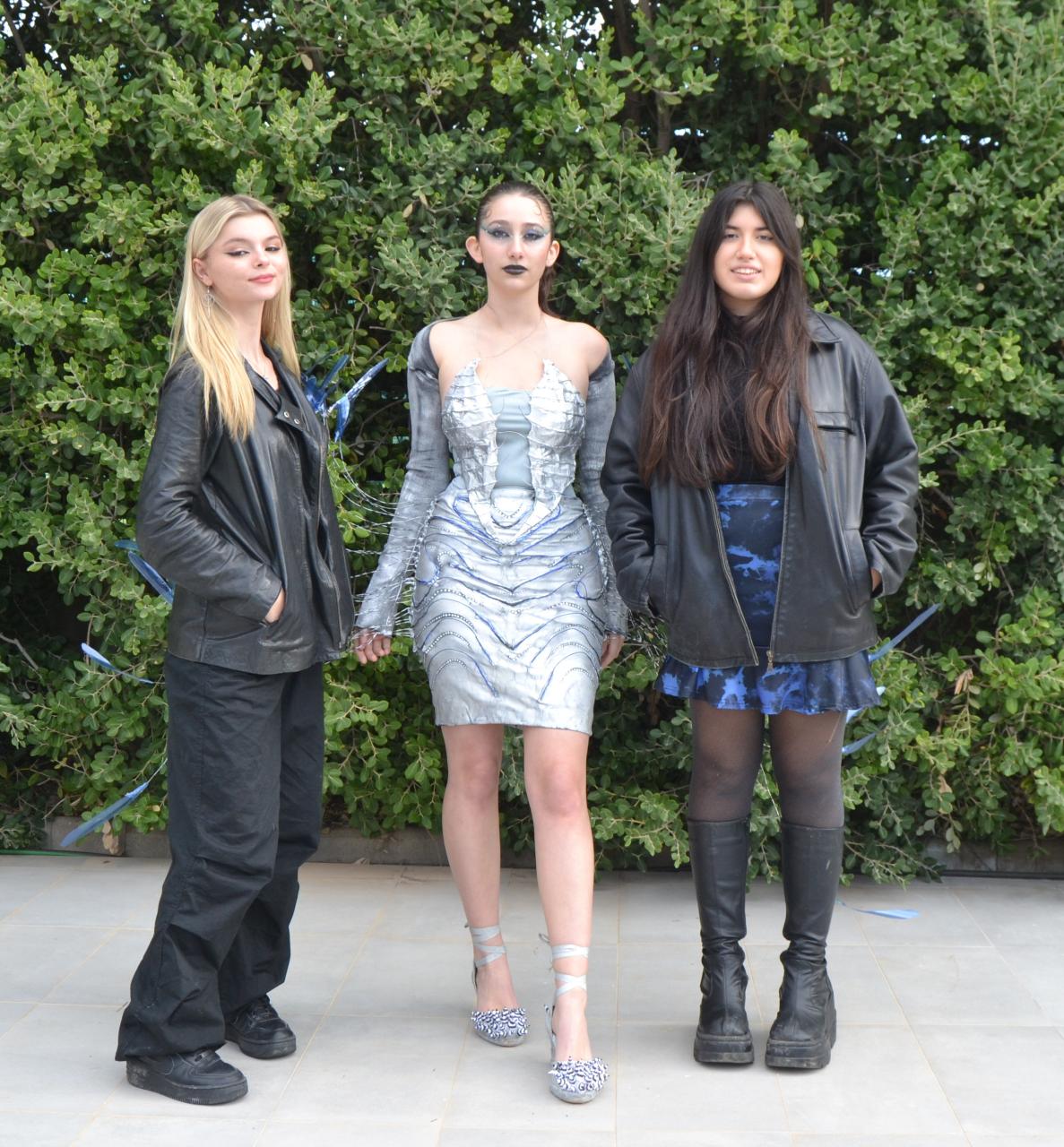 To our amazement and pride, team Interfectorum; Sasha, Susana and Giselle, were selected to take part in the world final in Abu Dhabi. Last week, they joined with other teams of young people from Ireland, Italy, US, UAE, UK and France to exhibit their design in a magnificent ground-breaking runway event at the Etihad Stadium in Abu Dhabi. This has been an incredible experience for them, taking their creativity to another level. The success of their design has to be down to their dedication and commitment to the very concepts behind the Junk Kouture initiative. The initial ideas for their design formed from research they had done on the lionfish and its invasive effect on marine ecosystems. Climate change and warmer sea temperatures have caused lionfish populations to dramatically increase and this in turn has caused a dangerous imbalance in already fragile marine ecosystems. So while the lionfish is very beautiful and mesmerising, it is also a predatory and poisonous threat when their numbers increase at such an exponential rate. This danger runs parallel with the poisonous levels of pollution that exist in marine environments because of the uncontrolled production of single-use plastics. These factors were taken on board with the materials selected to construct the Interfectorum design. Giselle describes the moment they realised they had got through to the world final. 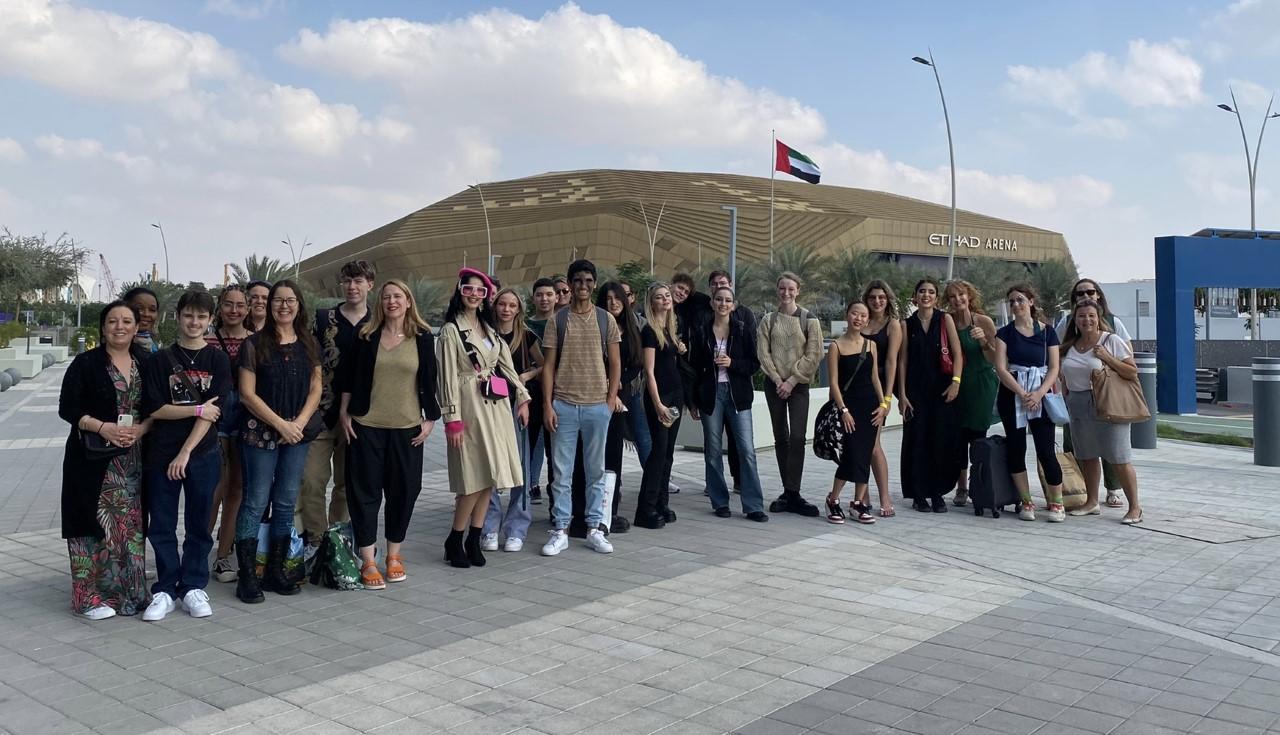 “As a group we all sat down to watch the semi- final evaluation which took place online, we were all very nervous. Out of 40 teams in each city final only 10 would be accepted into the world final. After an evaluation of all the designs they announced the winning designs. We all sat in suspense waiting to see if any of our school´s design teams would get in, and low and behold.. our design was announced as part of the winning 10! Our team was so ecstatic and happy that all our efforts put into the design had paid off, and we would now compete in the world final. The next steps we will need to make final touch ups on the dress to ensure perfection, and also to create a winning performance for the runway in Abu Dhabi. We will continue to push forwards as a team to secure a win in the world finals. Teamwork makes the dream work.

Our design, Interfectorum had to be beautiful and at the same time represent the hidden dangers that we need to be aware of and react to. Danger is represented in the spikiness of the discarded garden wires moulded to create the effect of fins protruding from the main bodice, and in the backbone, detail made from decorated pieces of chicken wire. The design had to feel fluid to create the effect of fins moving through water. The main bodice is made of repurposed lycra remnants sourced from a swimwear manufacturer. The blue plastic tips of the fins are beautiful and dangerous at the same time. The spikiness is echoed in the repurposed espadrille shoes decorated with paper cones. The metal spikes and cones are painted with subtle black and white stripes as a warning that around the blue and silver there exists a dangerous threat.“

The ideas perpetuated by Junk Kouture have influenced Academy students to change the way they view waste materials. The whole process has highlighted and confirmed their desire to embrace sustainable habits and become the changemakers of the future. 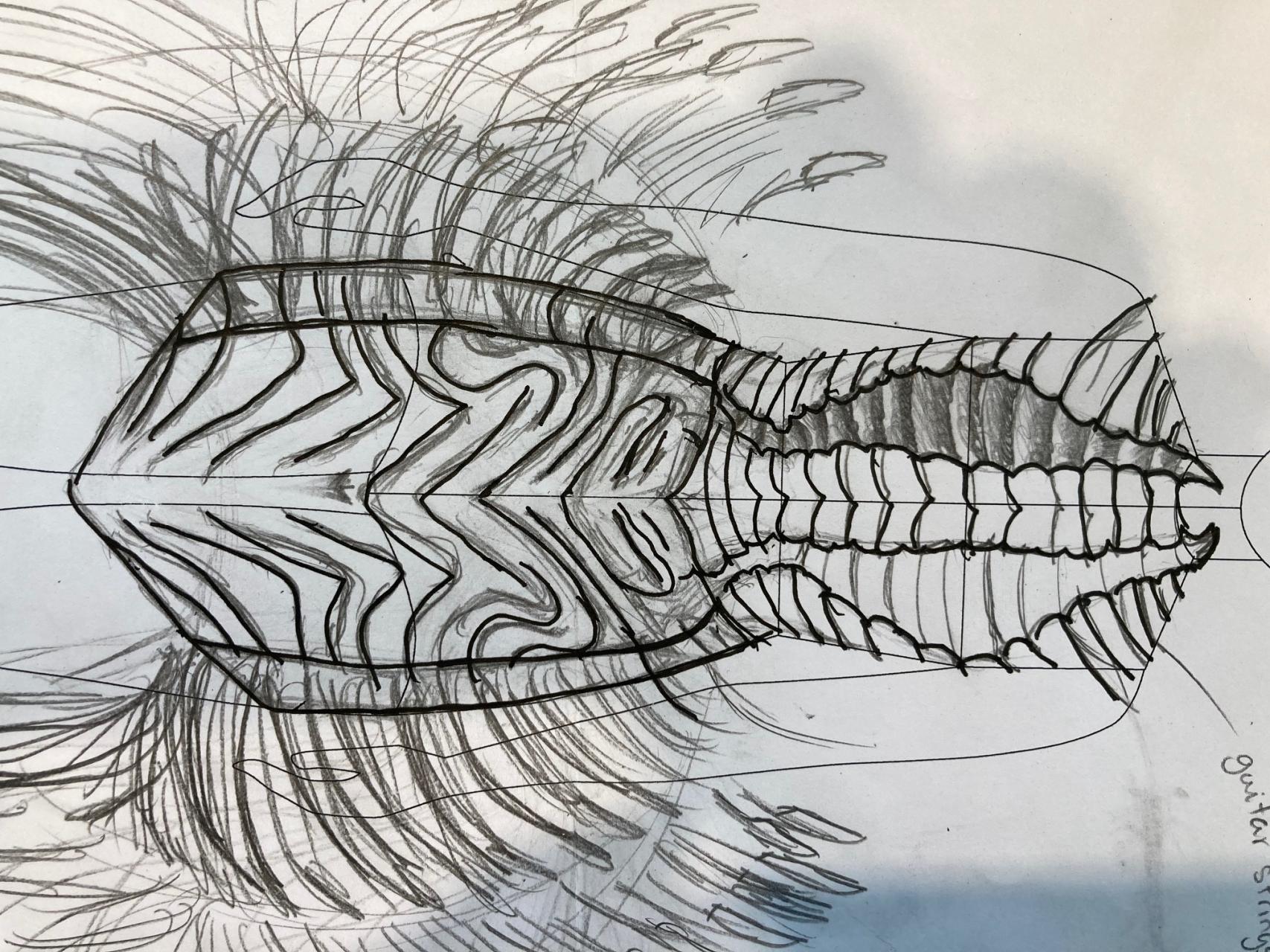 Junk Kouture has a 10-year goal of impacting the lives of 1 billion young people across the globe by 2032. We are enormously proud that our students are now a very real part of this vision.