“Mallorca’s culture does not get the recognition it deserves. The administrations know its cost but not its value.”

“Mallorcans have always been extremely good sailors, in every path of life, and when the winds have changed, they’ve always known how best to tack into the wind and remain on the correct course...”

Joan Bennàssar with a copy of his latest book and some of the many sculpture “settlements” he has created and which are on exhibition along the northeast coast of the island. | Majorca Daily Bulletin reporter

Joan Bennàssar is one of the most prominent Mallorcan artists. He was born in Pollensa in 1950. Those were a kind of dark years: hunger was common and there was no public water or electricity - how things have changed.

Nevertheless, an early talent allowed him to start painting thanks to his drawing teacher.
His inspiration comes from many sources and not only does he have a huge knowledge about contemporary art and the avant-garde, he also dips into the classics.

When he was young, he highlighted social ideals, then he went through the abstract art movement, impressionism, the realism of Francis Bacon, collage with found objects, and always had the cubism of Picasso in mind as one of his major influences. 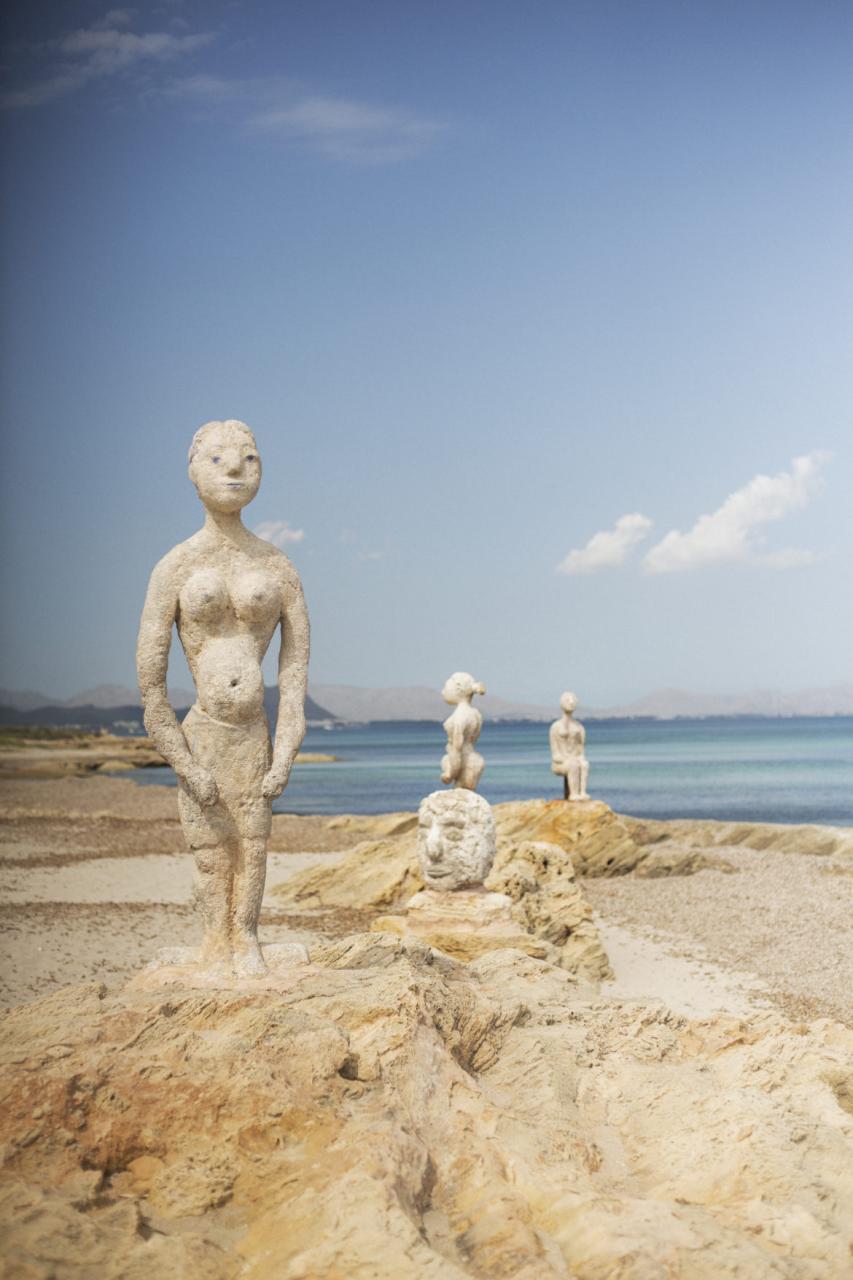 Nowadays, with a much more personal style that he refers to as primitivism (that’s how he defines himself “primitivist”), his paintings and sculptures stand out for their high quality of materials.
And today he is as proud to be a Mallorcan as ever - partly as a result of a magnificent outdoor exhibition of some 50 sculptures he has created which stretch along the east coast of the island from Can Picafort, where the fist “settlements” of sculptures, as he calls them, were installed in 2016, all the way down to Cala Ratjada.

çAnd recently he has produced a new book in Castilian, German and English entitled La Nueva Ítaca del Mediterráneo (The New Ithaca of the Mediterranean), which is a photographic and narrative journey through the set of sculptures that from have been installed in different parts of Can Picafort, Son Serra and the town centre of Santa Margalida.

This comprehensive work was initially the idea of Santa Margalida town hall, which wanted to convert the municipality, including its tourist areas, into a large social and cultural space.
Bennàssar said that the origin of this initiative lies in a first exhibition he held in 2016 under the name Ports d’alga marina.

“When they proposed it to me, I first wanted to check that it was a feasible project. From a landscape point of view, I found an ideal setting, looking out over the Mediterranean and then up into the Arta mountains, to recall stories from the past, return to the classics (which are always current) and, in a certain way, undertake a journey like that of Ithaca,” said Joan Bennàssar. 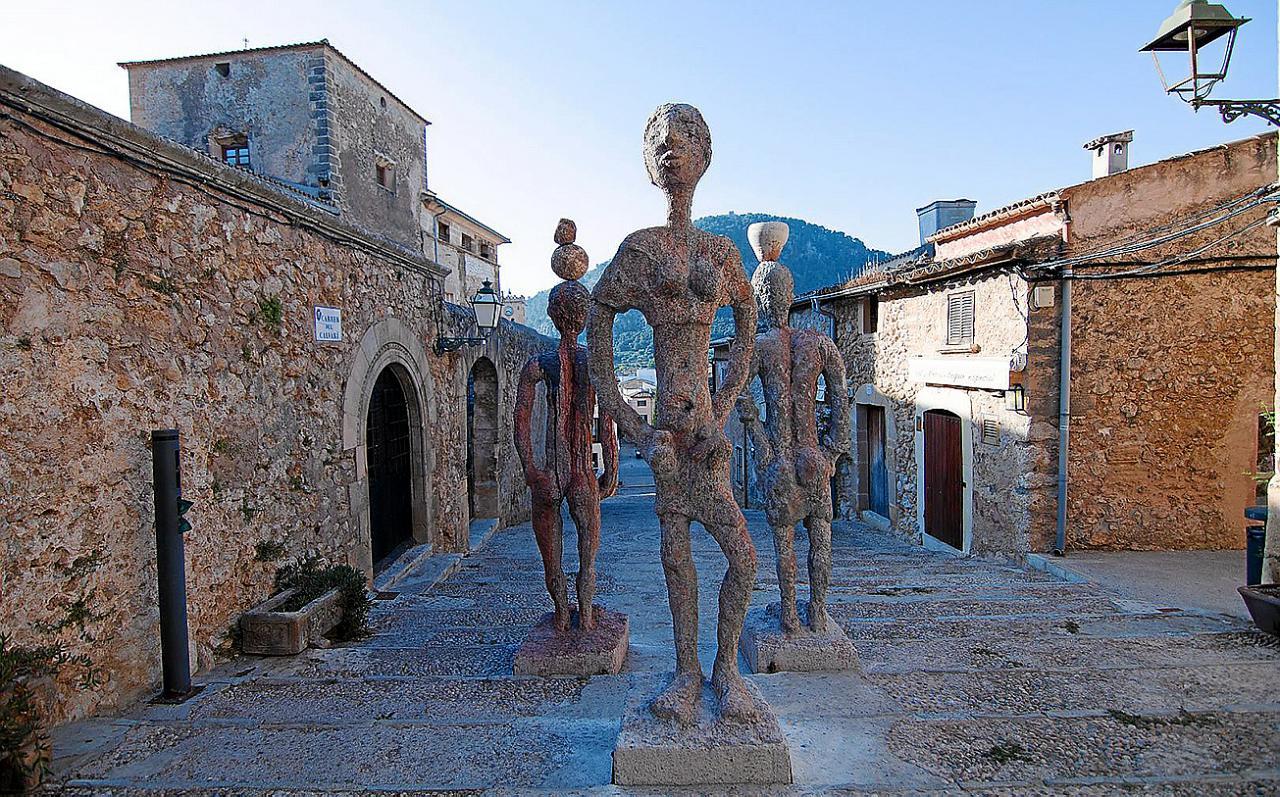 The first collection “had the warmth of the people from the first moment and I think that part of the success is that the sculptures are part of a narrative in which the Mediterranean and our own history are very present”. “I don’t like to condition the viewer, but I do like to give them hints of what I want to convey.” The continuation of the project came about when Bennàssar won a public competition promoted by Santa Margalida town hall to culturally invigorate the municipality.

“It was then that I was able to extend the sculptures to the town centre of Santa Margalida and to Son Serra, an environment that I found fascinating,” he said.
“It reminds me of the old Mallorca, it’s still very virgin, very rural and traditional” he told the Bulletin this week.

The entire ensemble was completed in the spring and consists of 14 sculpture “settlements”.
One of the novelties of the latest figures is the use of tiles and the faces of demons, in reference to the traditions of La Beata.
The book includes numerous photographs taken by Marta Fornes, Cati Vallespir, Pau and Joan Bennàssar. 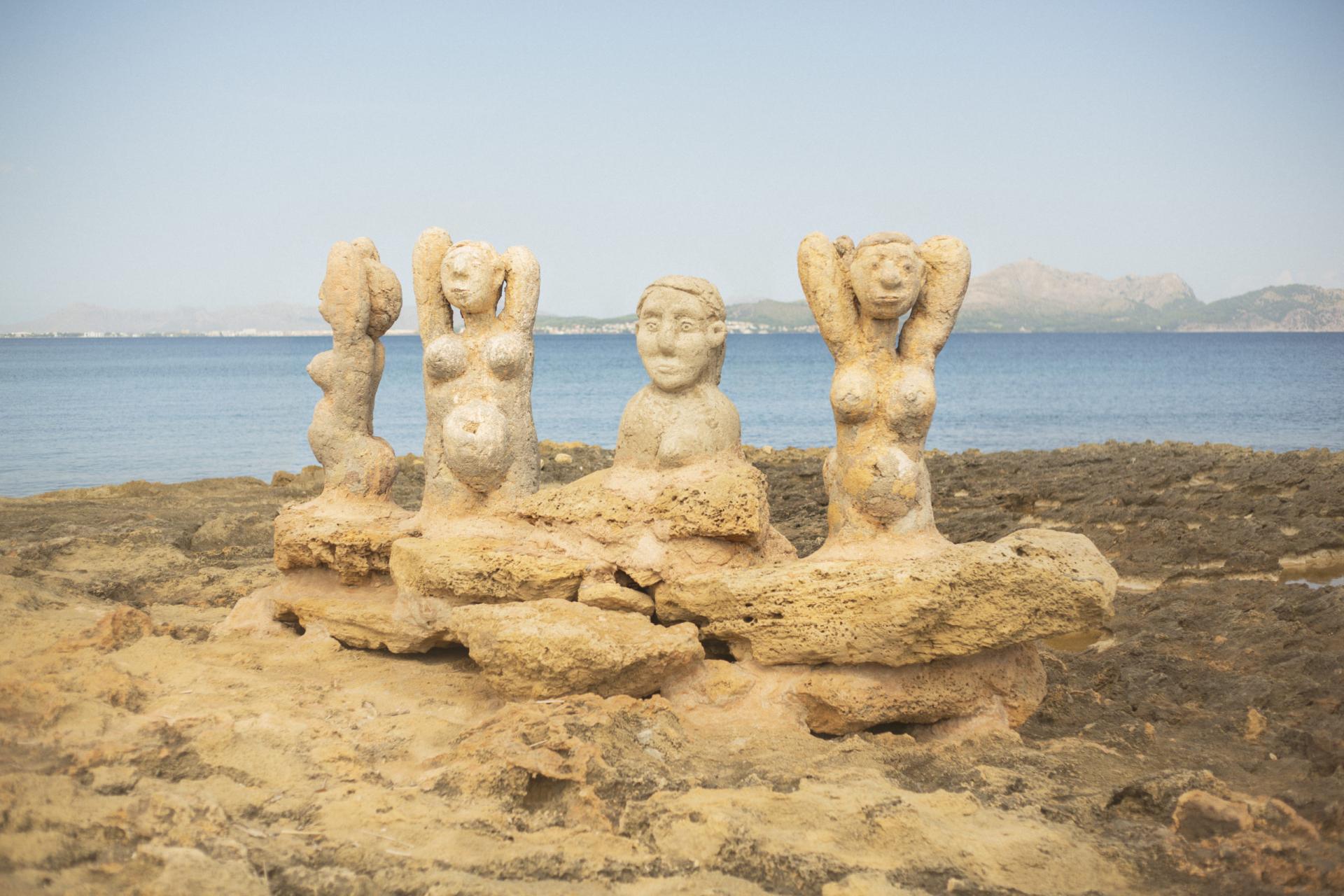 The texts are by Camilo José Cela, Robert Graves, Felip Munar, the mayor of Santa Margalida, Joan Monjo, and Joan Bennàssar himself.

“It was the start of a new journey for me and it allowed me to explore and explain what it is to be Mallorcan and to be part of this enormous Mediterranean family we live in. The response from residents and visitors has been extremely welcoming. It was a wonderful sensation to have been able to have staged an open-air exhibition, which is free, and to see parents come with their children and enjoy my work and the stories - to reflect on what the Mediterranean means and have their pictures taken next to my work.

“Over the years I have worked all over the world from the most exotic countries to the most vibrant cities, not to mention famous capitals of art. I could have settled down in any one of them but I always felt this calling for Pollensa, Mallorca and the Mediterranean.

"There really is no place like it and I am deeply impressed by how the Mallorcans have embraced change over the years, how the island has developed and how the island has managed to cope with globalisation. On the one hand, the fact that so many people from all over the globe want to come to Mallorca, either on holiday or to live, is testimony not only to the beauty of Mallorca but also how well we’ve managed to respond to the changing world we have lived in and are living in. One has to remember that Mallorca has been home to scores of different races and religions over the centuries, but we’ve always managed to accommodate them, and I think that is a very strong part of the Mediterranean culture and way of life.

“For example, with the new direct flights between Palma and New York, from Pollensa (where he has also exhibited as well as Lluc and Soller) I am just 10 to 12 hours away from the States, or 15 hours from Singapore. We live in a very small world today and we should be proud that Mallorca is a shining beacon for people in search of inspiration, relaxation, adventure and culture.

“And culture embraces everything - from the food, the wine, the clothes and of course, the magnificent and traditional fiestas. Culture is not just art, it is all-encompassing of what we stand for and how we have been influenced by other races and cultures who have come to Mallorca over the centuries. The island’s history is so rich - for example my surname has its roots in Arabic and my first wife was English. 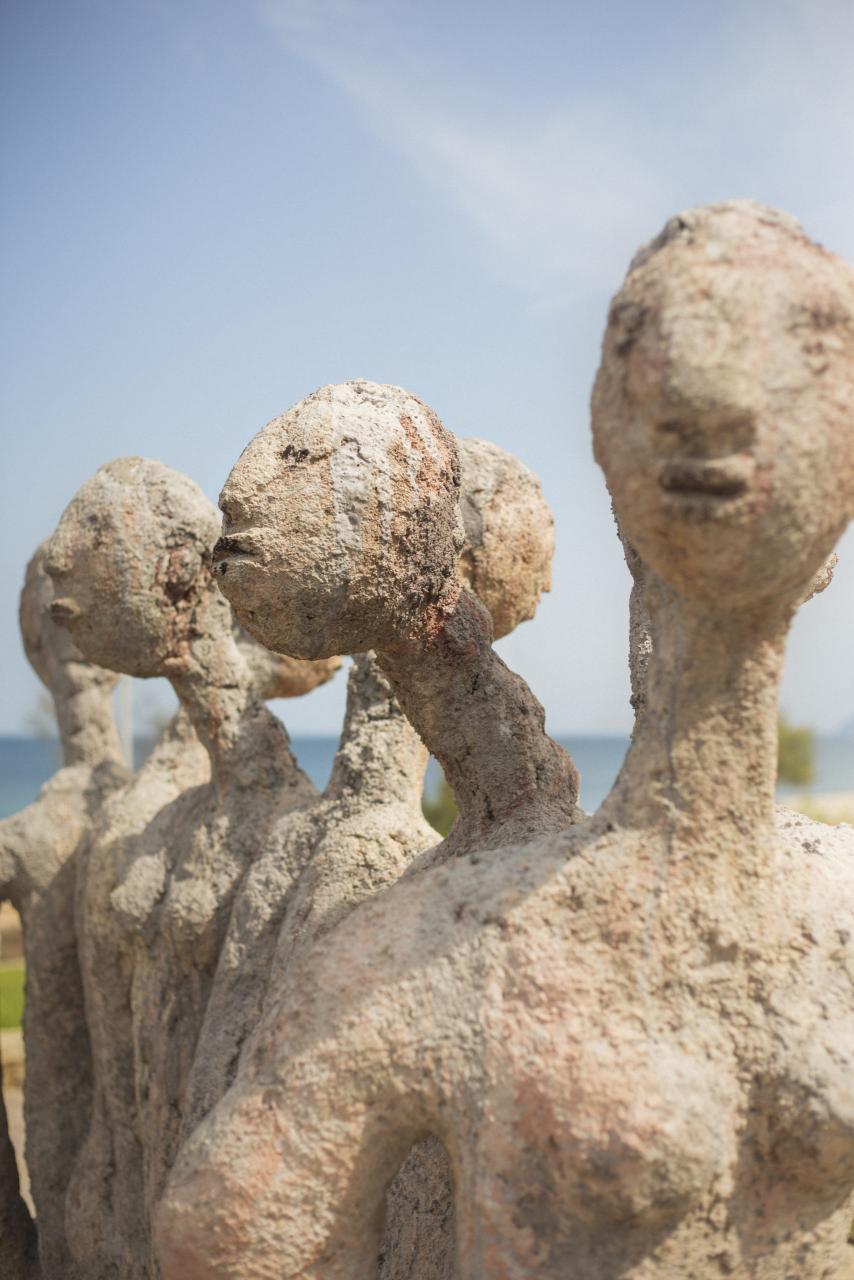 “And the British have played an important role in modern-day Mallorca through tourism. One of the first to champion the island was the great late writer Robert Graves, who spent much of his life in Deya where he is buried. His family continue to play an important part in sharing his love for the island and its history. Plus, more recently we’ve had the French, the Germans even the Russians coming to Mallorca and putting down their roots.

“At the school my nieces and nephews attend, some 50 per cent of the classes are made up of foreign residents and that is exciting. It serves to broaden the mind, opens up people to other cultures and ways of life, and that all helps to make Mallorca the vibrant island and community it is.

"“The Mediterranean has been a collection of little towns and villages living on top of each other, but we’ve always managed to get along because deep down we all share one thing in common - the Mediterranean and its great history, especially that of the Romans and Greeks. This has always had an influence on my work and what I try to convey.

“But at the same time, I fear that while the non-metropolitan municipalities want to enhance their local communities and bring new life to their surroundings by embarking on cultural projects such as mine, in Palma there is a different attitude towards culture - and it is the wrong one. The administrations appear to know the cost of culture but don’t appreciate its true value.

"In Palma there are some spectacular buildings such as Es Baluard, Casal Solleric and La Llonja but they’ve been neglected over the years. They are perfect locations for exhibitions and to display and promote our culture, but many are empty and to me that is a great shame.

“There are so many galleries in Palma today and more continue to open. They attract and serve the local and global market, but the private sector gets no support from the public sector. With an increasing number of wealthy and cultured people coming to the island for various reasons, we should be championing all things Mallorcan and Mediterranean. There’s not much point talking about it unless something is actually going to be done about it and that frustrates me,” he said.

“As an island, we are so well connected. I have clients all over the world, as do many other artists based in Mallorca. It is so easy to ship our work, and the same can be said for anyone wishing to come here; we’ve never been so accessible. So I think there is a conversation the administrations need to have, one about treating the island’s culture in the proper way. After all, very few places have such a rich culture as Mallorca and at times I worry it is being allowed to go to waste. On the one hand, we’ve achieved great things by being at the forefront of globalisation and being such a popular tourist destination, but there is still so much more we could be doing.

“I love and embrace the fact that people merely want to come and enjoy the lovely beaches or the mountains and to swim in the Mediterranean, but many are missing out on experiencing our culture. That is why I am extremely pleased to have been able to have had the opportunity to have created the collection of sculptures which have been placed in some of the most emblematic locations on the island, in the Mediterranean. And I hope that this latest journey in my life has not ended, because it’s been extremely gratifying to have made so many Mallorcans proud to be Mallorcan while reaching out to so many new faces.

“Mallorcans have always been extremely good sailors, in every path of life, and when the winds have changed, they’ve always known how best to tack into the wind and remain on the correct course. I know that will continue to be the case. We’ll continue to progress, be open to the outside world and more than willing to share our culture with the liberty we enjoy on this island.”

It is almost word-for-word the same PR handout given to all media. That’s the MDB for you nowadays.

Humphrey... >you< wrote this? Really? It's like two different writers. Are you sure?