As we saw last week, paella polemics begin with a bang when Spaniards start to discuss the essential ingredients — especially the version from Valencia, because that’s where paellas were first made.

You come across paella purists who say that if the dish isn’t cooked in the open-air and over a wood fire then it isn’t worth eating.

It is true that the best heat for cooking a paella is that given off by burning wood. The heat is never concentrated on one spot and the entire base of the paella pan gets a good share of the temperature.

Most people also agree that a paella cooked over wood fire tastes better. As the vapour from the pan rises it meets the cold air, condenses back into liquid and some of the droplets fall through the smoke, perfuming the rice and giving it a slight tangy taste.

But it is also true that you can make excellent paellas over a gas flame or electric heat. In the end, what counts is not so much the source of heat as the contents of the paella pan.
I’m sure most people would rather have a lovely paella done on a gas flame than a badly cooked one done over a wood fire in the open-air. 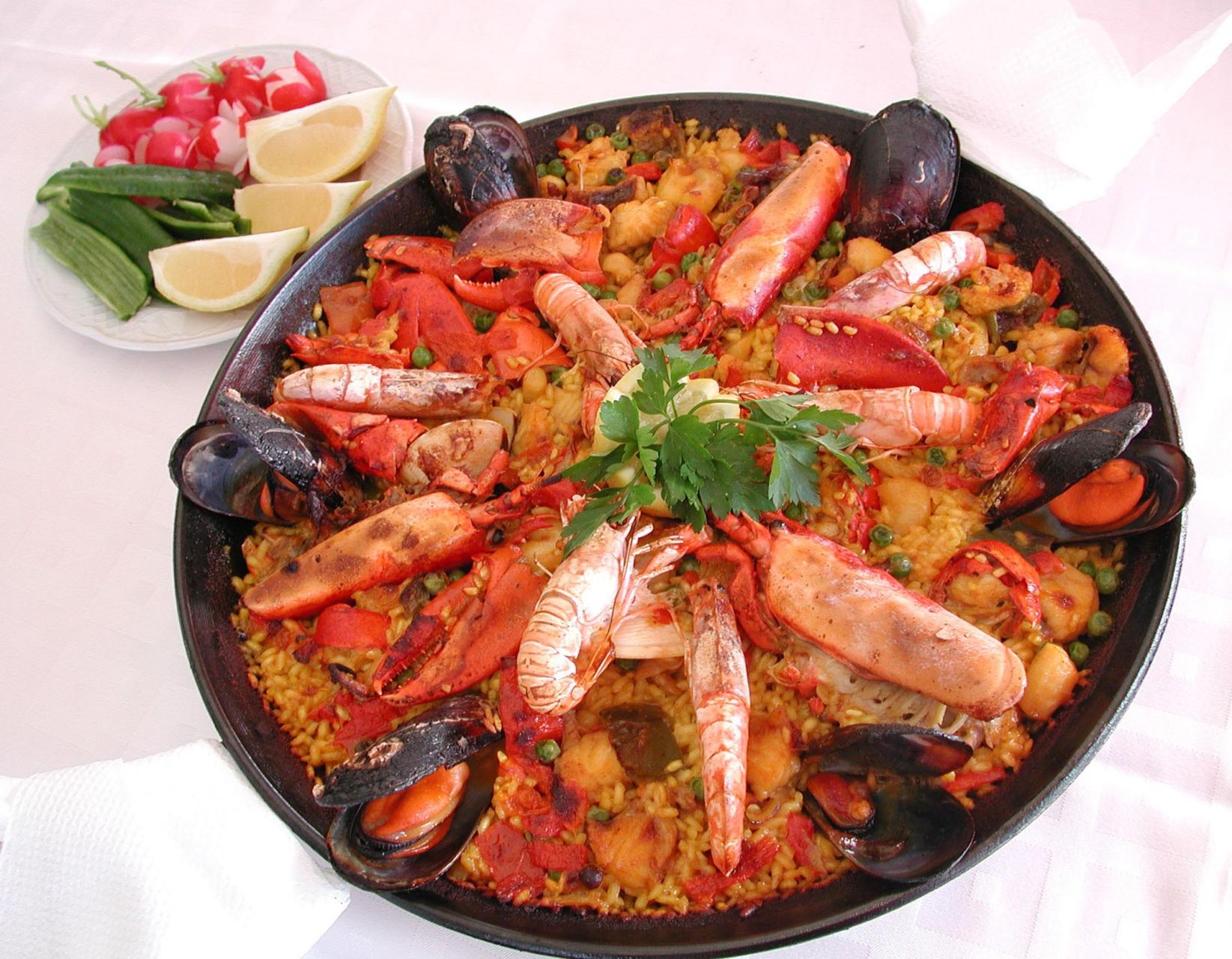 Controversy also rages over whether the rice should be sautéed with the sofrito before adding water or whether the water goes in first. Some people can get really worked up over this point.

The truth is I’ve had superb paellas done both ways and I’m sure the pedants couldn’t tell one from the other once the rice is on the plate.

Some people say that by sautéing the rice it absorbs more of the sofrito flavours. But the rice will also soak up any taste there is when the water or stock is added.

In Alicante they sauté the rice and in Valencia they sprinkle it into the cooking liquid. I’ve tried it both ways and I don’t think one is better than the other.

To stir or not to stir, that is another question. Paella polemics reach their peak over whether the rice should be stirred or not after it has been added to the pan. It is the non-stirrers who are the pedants here. They claim that if the rice is stirred it is ruined. 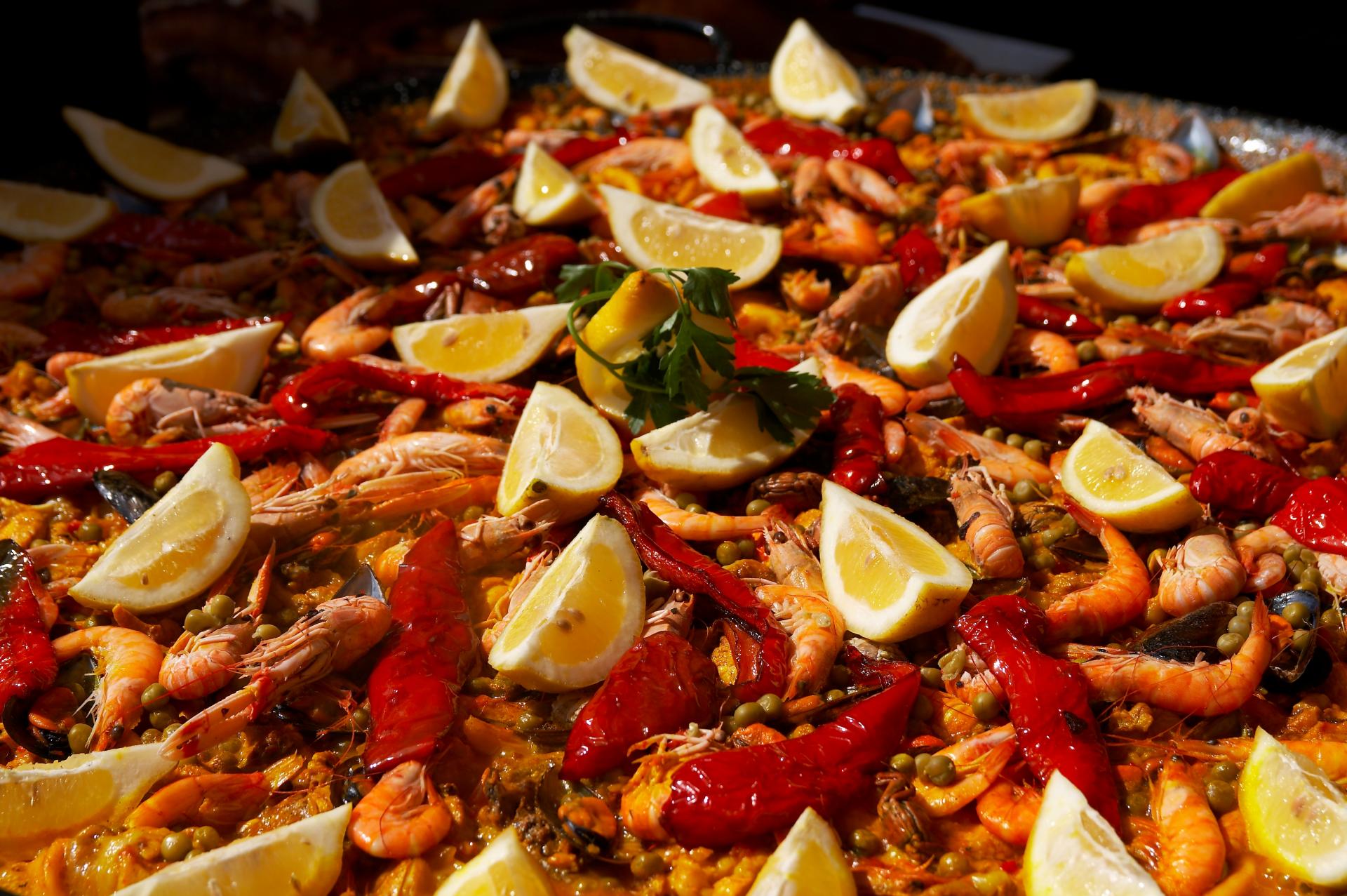 Most others, and I am one of them, say that it doesn’t matter if the rice is gently stirred two or three times at the beginning.

Such nonchalance really upsets the non-stirrers and I’ve seen some of them get into a terrible temper over this point.

If gentle stirring is necessary during the first five minutes it won’t cause any damage and it certainly isn’t going to ruin the paella, as some claim.

But always bear in mind that a paella is not a risotto. The Italian varieties of rice used for a risotto must be stirred constantly so that the exterior starch on the grain is released to mix with the stock and form a thick silky liquid. If we stirred a paella as much as a risotto, it would get ruined.

So after the paella rice has been cooking for five minutes, it is a mistake to stir it. By then the rice has absorbed a fair amount of liquid and it should be allowed to settle. From this point on the paella should be shaken — not stirred.

This is done by gripping the paella pan with both handles and giving it very short and jerky movements to right and left and backwards and forwards.

This allows some of the surface liquid to seep to the bottom of the pan to prevent the rice from sticking.

With paella polemics being so rife, you can see why I said last week that whereas several people can help in the preparation work, there should be only one person in the kitchen while the paella is being cooked.

Although the making of a paella is relatively easy, you still have to learn a few rules and follow them.

It is also the kind of dish in which observation and experience count for a great deal.
I once saw a very good professional Mallorcan cook make a paella for a group of friends. When it came to adding the rice (to the liquid in the pan, so without sautéing it) he casually threw it in by the handful. The rice was perfectly cooked that day.
There was nothing haphazard about the cook’s method although to the untrained eye it seemed as if he were adding the rice any old way. 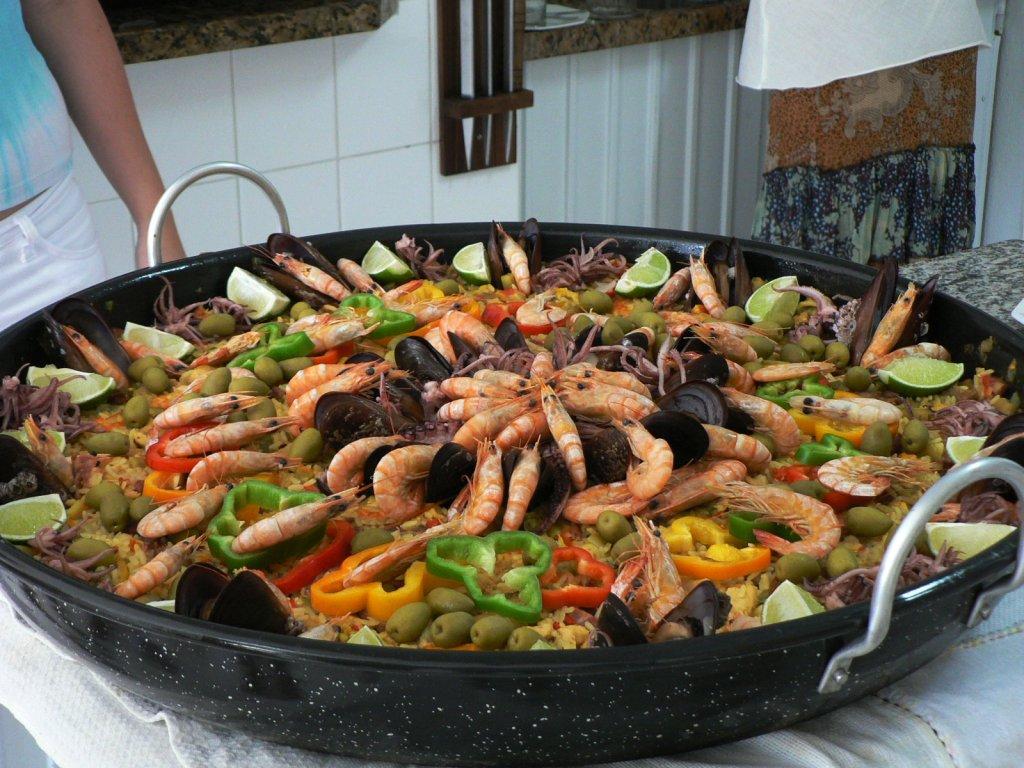 And he knew the exact weight of a handful of rice (his handful of rice) so although it looked as if his method was somewhat careless, everything he was doing was nicely calculated and success was ensured.

It takes years of experience to get that cook’s level of knowledge and technique but it helps if we can learn a thing or two from others, especially the pros.

It also helps if you are not afraid of getting involved with rice dishes. Some people get into a real pickle when cooking rice and they invariably make a mess of it.

Yet, as so often happens in cooking, there is nothing to it — so long as you learn a few simple rules.

You mustn’t expect to master rice cooking — or any other kind for that matter — unless you have done it frequently and have finally got the hang of it.

Novices who do a paella once or twice a year will seldom do a good job of it because they won’t have had the chance to make essential observations and to learn from past mistakes. In cooking, practice really does make perfect. Or nearly perfect.

It is of vital importance in the making of any rice dish — be it paella, risotto, or Chinese fried rice — to use the right variety of rice and always one from the same manufacturer.
That way you become familiar with the rice and you learn, among other things, how much liquid it absorbs. This is an absolute must when working with any variety of rice.

The most common mistake when cooking rice is that of using too much liquid, or too little. The correct amount is crucial and a mistake either way can ruin a paella.

Adding too much water means the rice will be overcooked or will be swimming in excess liquid. And using too little ensures the rice will finish up like shotgun pellets.

The amount of liquid depends on the variety of rice and the dish we are making. Long grain rice cooked Chinese style needs the same volume of water and a tiny bit more.

But a risotto made with Italian arborio or carnaroli (both of which are highly absorbent) will easily need up four times as much stock per volume of rice.

For a paella we should allow 100-125 grs of Spanish round rice (arroz redondo) per person. Put it into a suitable container to find its volume and then use two-and-a-half to three times as much water or stock.

If the ingredients in the paella pan are cooked to tenderness and we add the correct amount of stock or water with the rice, by the time the liquid comes back to the boil we should cook it for 15 minutes and then let it rest off the heat for another five.

You should end up with rice that is nicely cooked through and with each grain separate but at the same time with a film of moisture.

It’s a mistake to add the water or stock to the paella pan and then let the ingredients cook merrily for 15 minutes or so before adding the rice.

As the surface of the paella pan is extremely wide for its depth, a good deal of liquid is lost through evaporation. It has to be replaced or the rice will be undercooked.

It’s not easy to work out exactly how much liquid has been lost through evaporation, so if we try to judge it by eye we can either under or over compensate. Either way, the rice won’t be properly cooked.

You can get over this problem by sautéing the meats with the sofrito until they are tender, which will take 20-30 minutes. You then add the boiling water or stock with the rice and the final 15 minutes cooking and five minute rest will make the chicken and pork very tender.

Many people find heat control is a problem and they either cook their paella on heat that is too high or too low. Either way their paella is in trouble.

When the water and the rice go into the paella pan the heat should be as high as possible to get everything boiling as fast as possible. The contents of the pan should be kept boiling at a merry rate for the next seven or eight minutes.

This is the period when it doesn’t really matter if you give the rice a gentle stir with a wooden fork. But for the last seven minutes, when the rice has absorbed a good deal of liquid, the heat should be lowered and there should be no more stirring.

During the final seven minutes the rice can start to stick to the bottom of the pan, so it is essential to shake the pan carefully and to move it around the gas flame, especially round the edges.

Always use the biggest ring on your cooker and don’t keep the heat in the centre. You must keep changing the pan’s position so that no one area is in contact with the direct heat for too long.

You can buy an extra-large ring that is designed for paellas. They come with a stand and are used with bottled gas. They have two exits for the flame, one in the centre and one on the perimeter.

Both flames are used for the first seven minutes or so and the paella is finished off with the outer flame only.

As a rule, if you look after the edges of a frying pan and its contents, the centre will take care of itself. This also applies to pancakes, Spanish potato tortilla and similar dishes.
Chinese cooking techniques, strangely enough, can come to the aid of the paella maker when applying the heat.

I don’t have one of the special gas rings, so I have to use the biggest gas ring and move the paella pan around during the last seven or eight minutes.

But some years ago I found I get much better results by cooking the paella on top of a Chinese wok ring.

For the final seven minutes, the danger period when the rice can stick to the bottom, the pan is on the wok ring which keeps it away from direct contact with the flame. But there is enough indirect heat to keep the rice cooking properly and without burning.

More about paella next week and also how to season a new paella pan.