The Gran Meliá brand lands in Menorca with the inauguration of its fifteenth project in the world, as a prototype of an energy-neutral carbon-neutral hotel

The Gran Meliá brand lands in Menorca with the inauguration of its fifteenth project in the world, as a prototype of an energy-neutral carbon-neutral hotel marked by a variety of gastronomic options that are a tribute to Menorcan cuisine and way of life, exquisitely designed rooms with private pools and suites of up to 130 square metres.

Located on the beach of Santo Tomás, the hotel has spaces dedicated to wellness, with a spa by the French firm Anne Semonin, as well as a gastro proposal based on local produce and Mediterranean flavours created by the legendary S'Amarador, and with Cru, by the restaurateur Joan Canals, who has replicated the cuisine of the Ulisses restaurant in the hotel. 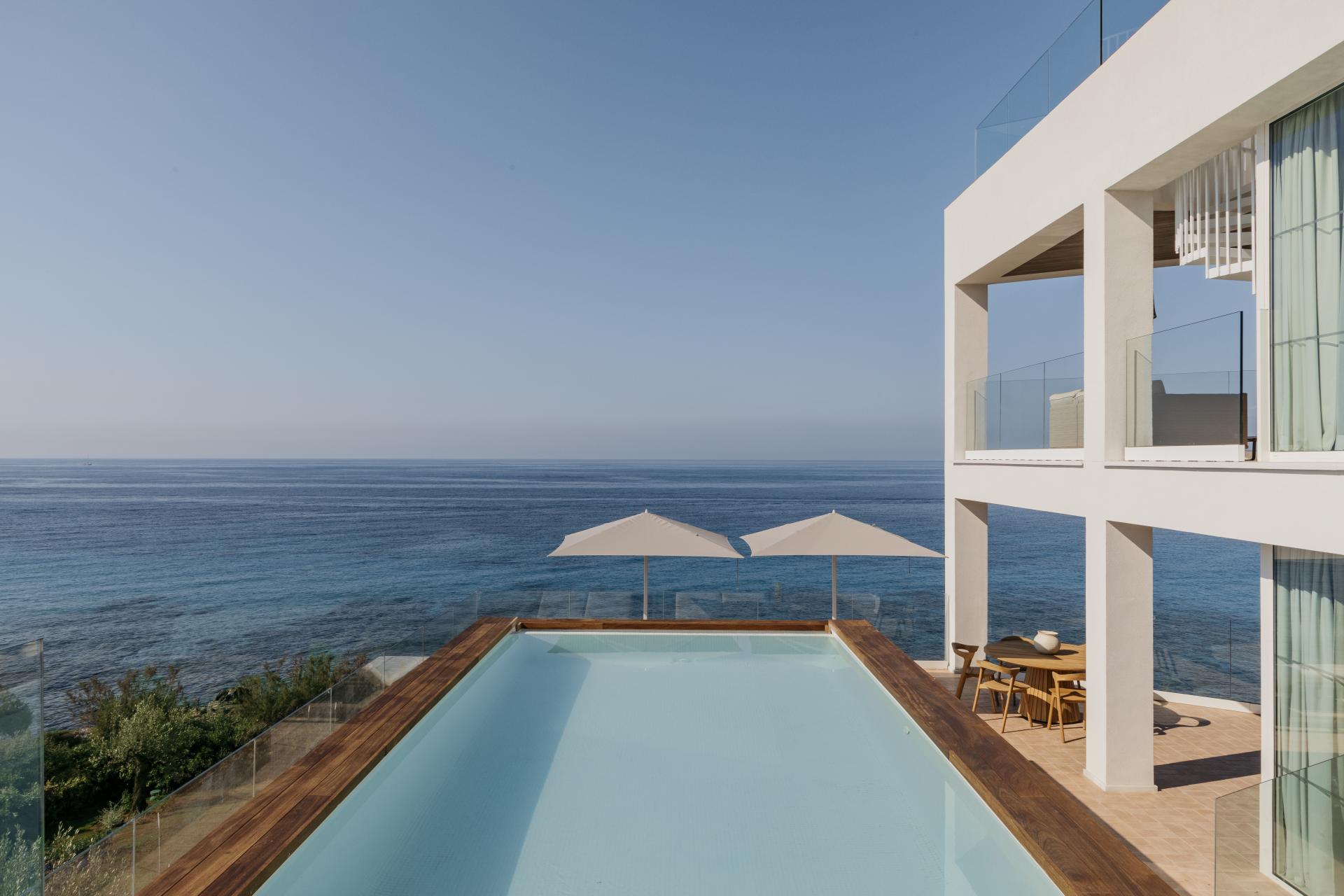 The 5-star holiday resort of the Gran Meliá luxury brand, Villa Le Blanc, opens its doors as a member of the prestigious Leading Hotels of the World, the only one in this segment on the island of Menorca. Its commitment to the environment and its dream location make it a "destination hotel" destined to be the place to meet and relax in the Mediterranean.

The Hotel Villa Le Blanc is located in an idyllic natural setting on the coast of Migjorn, on the beach of Santo Tomás, halfway between Mahón and Ciutadella. An ideal enclave for discovering all the cultural and natural attractions of this island of Menorca, declared a Biosphere Reserve by UNESCO in 1993 and a European Region of Gastronomy in 2022. 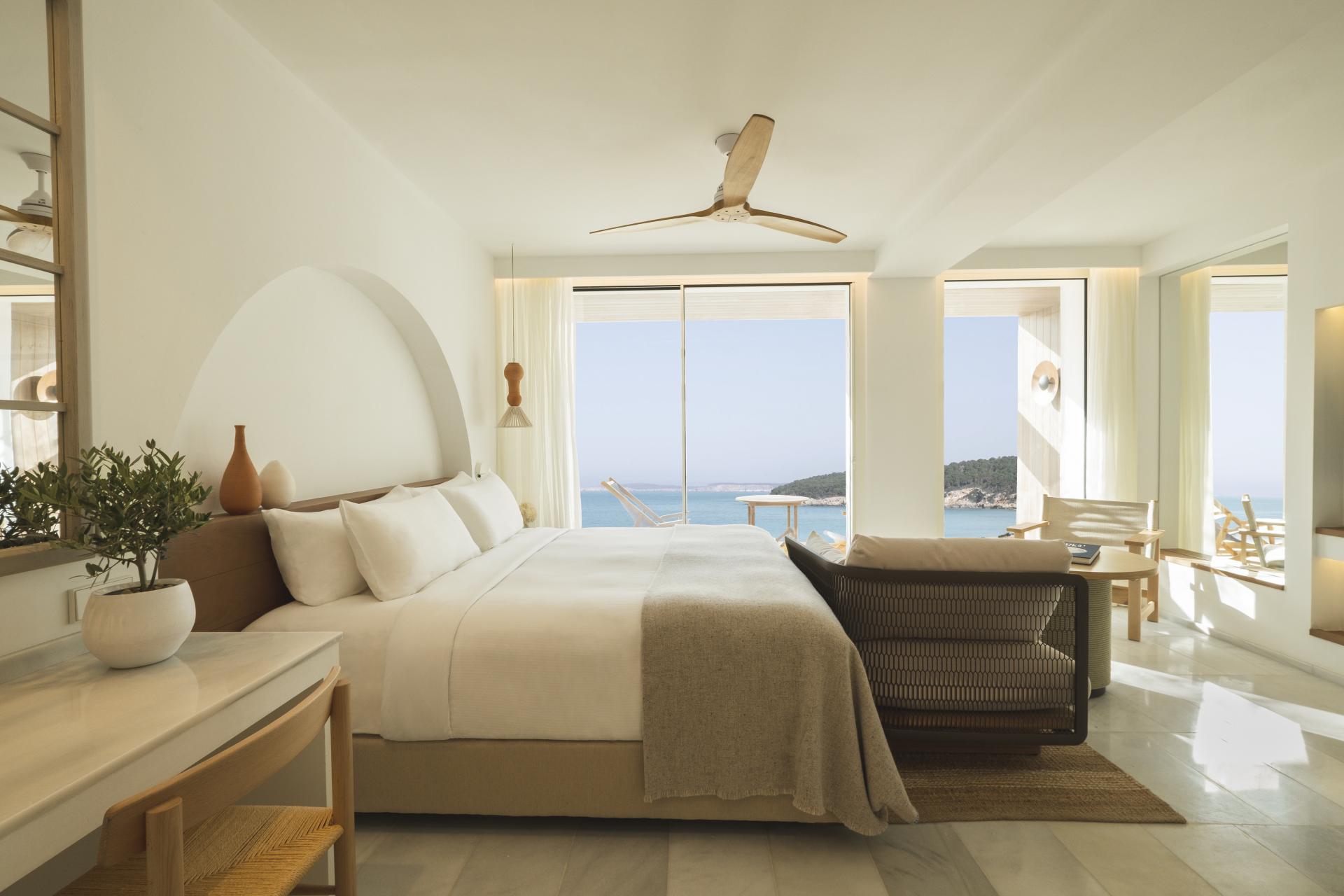 Located in the former Sol Beach House, refurbished by architect Álvaro Sans, "the Villa Le Blanc project is inspired by the vernacular architecture of the island's villages", as the professional explains. The hotel has a total of 159 rooms, of which 48 are Premium category and 68 Supreme. Both the Penthouse, the Master Swim Up and the Presidential Suite offer a whole repertoire of luxurious comforts, including privileged sea views, which can be enjoyed from their balconies and from the room's private swimming pool. With white and blue colours and large terraces and porches characteristic of the architecture of the Mediterranean islands, these spaces intertwine the exterior with the interior.

"The Villa Le Blanc project is inspired by the vernacular architecture of the island's villages. The Menorcan arches on the one hand, and the white of the typical houses on the other, stand out as characteristic features. With a technical approach, we rescued the tradition of roof tiles, which in Menorca have been used throughout the ages for the rainy winters and which, traditionally, were painted white to repel the heat in summer", explains Álvaro Sans, from the ASAH studio, architect of Villa Le Blanc. 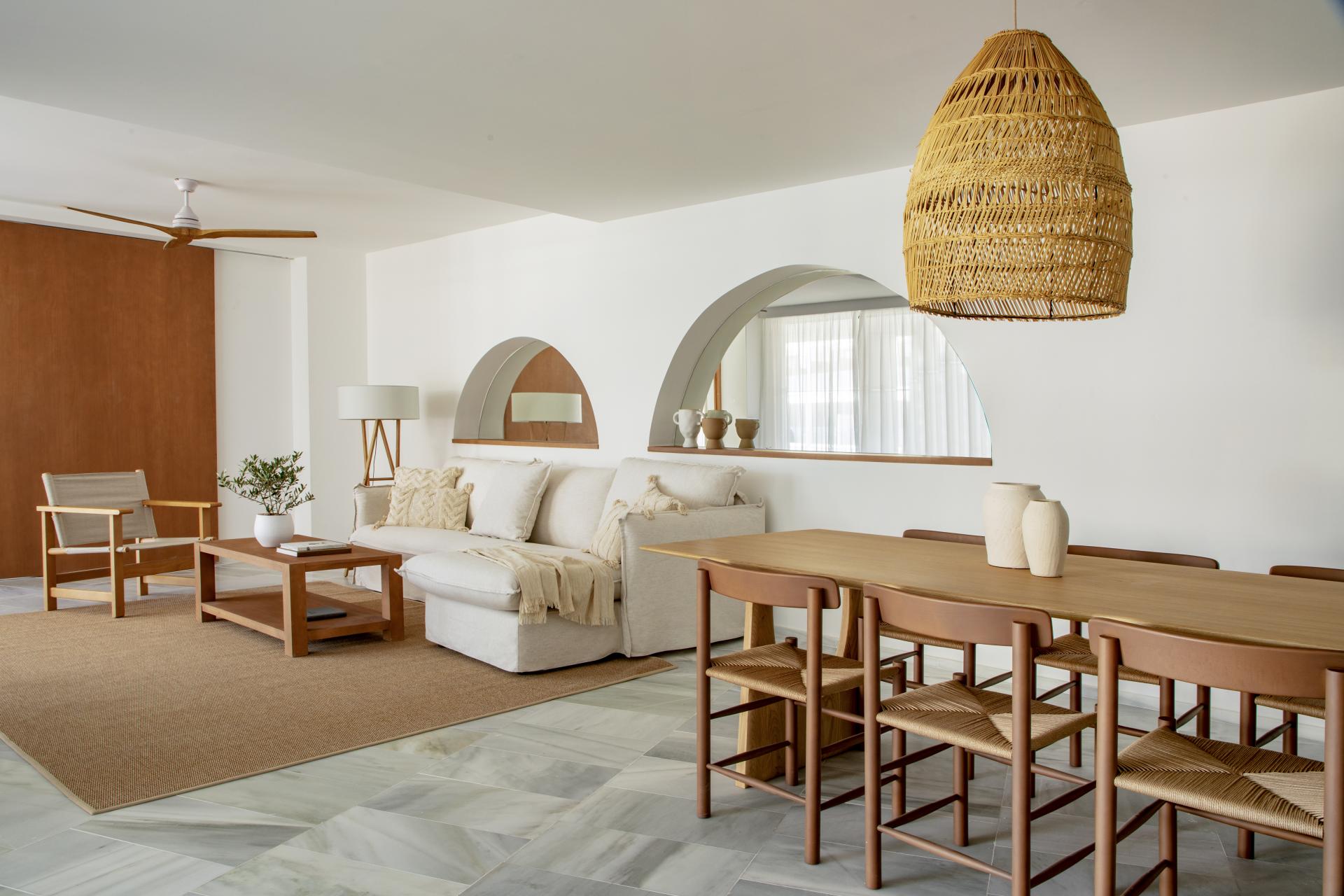 In terms of gastronomy, the hotel is a tribute to Balearic products, with exquisite cuisine based on the island's raw materials in its various restaurants.

The Menorcan restaurant S'Amarador is a reference point in Ciutadella, and is said to be on the podium of the island's seafood cuisine. Known for its wine cellar with more than a hundred wines and for working with the best local produce to give shape to its delicious rice dishes, seafood stews and the freshest fish from the fish market, with special attention to the queen of the Balearic sea: the red lobster, it will be one of the culinary highlights of the hotel.

Located on the ground floor of the hotel and on the central terrace overlooking the sea, the S'Amarador restaurant will offer a tribute to the cuisine of its mother restaurant in the new Villa Le Blanc. Preserving and adapting the tradition of the old fishermen's inns that were once located throughout the port area.

On the other hand, the line of work and personality of the restaurateur Joan Canals of the Ulisses restaurant will be reflected in Cru. Seeking the essence of the ingredients that make up the island's land and sea larder, Canals is perfect at integrating products - fish, seafood, vegetables and oils - and contemporary executions. 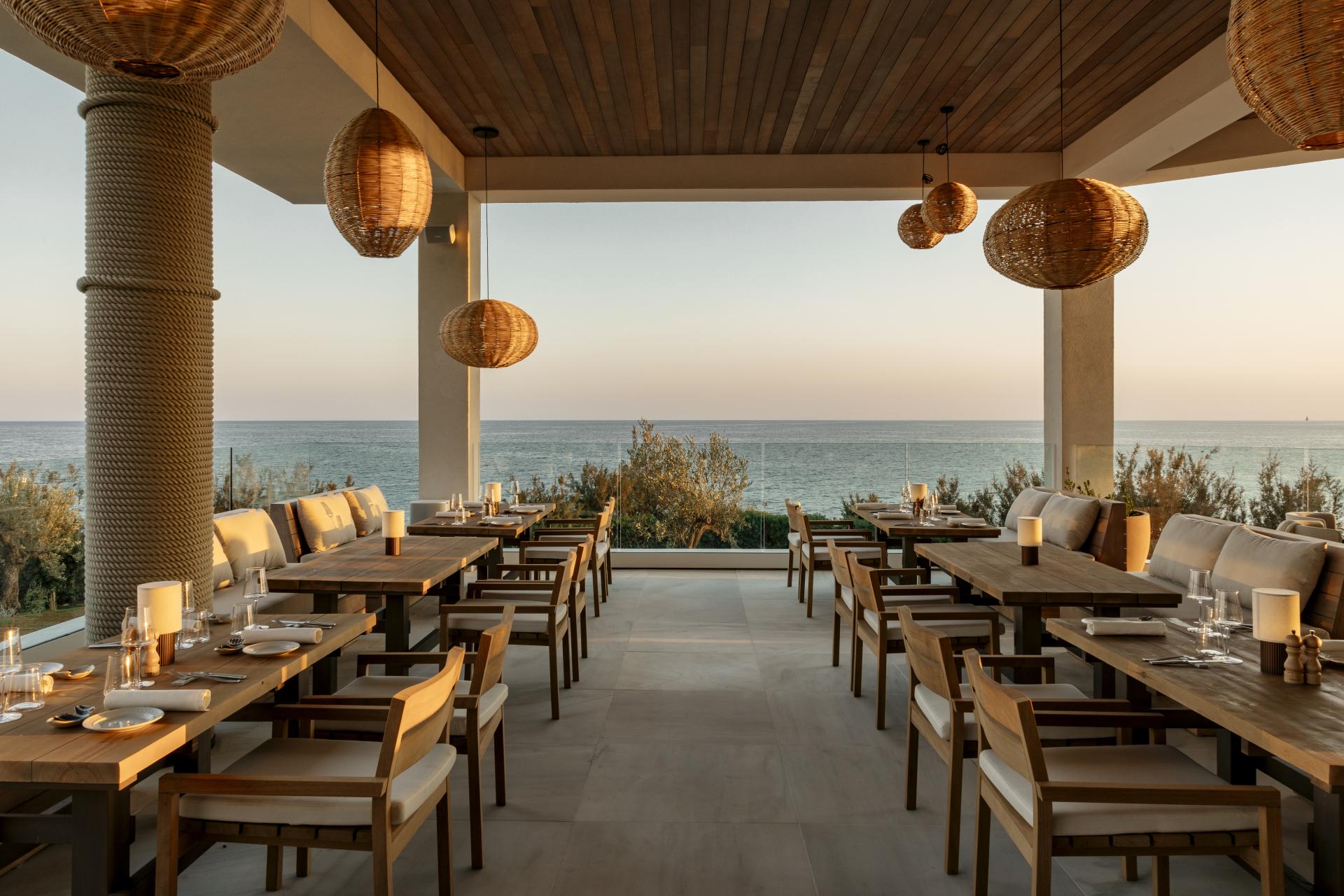 On the side of harmony and wellness, the hotel becomes a temple of care and beauty with the firm Anne Semonin Paris. Based on vegan cosmetics and natural products, Anne Semonin opens its third spa in Spain, preceded by selected locations in the most exclusive hotels in the world, including luxury resorts in Japan, Hong Kong, Doha, Greece and the Maldives. 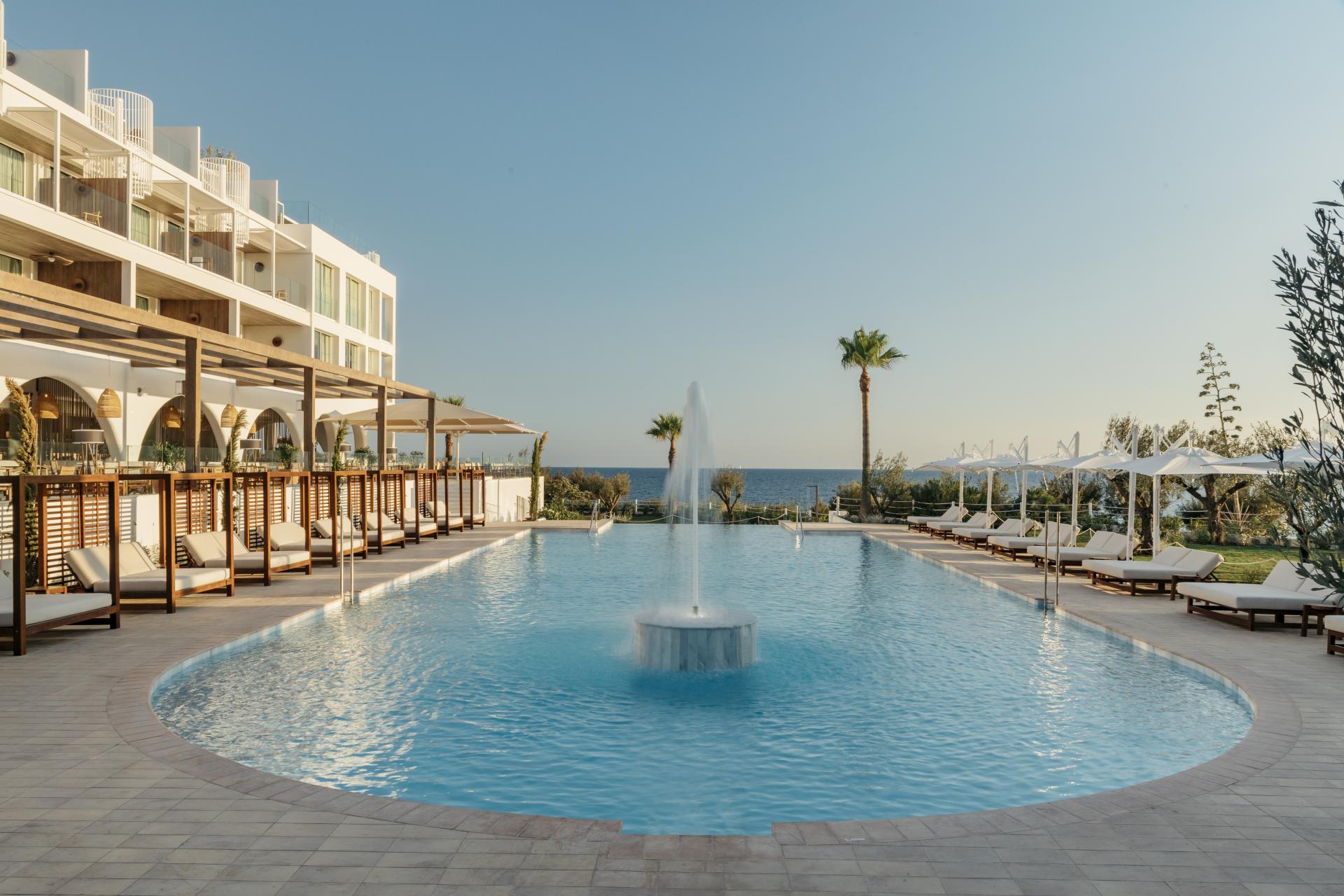 In turn, the project has been conceived as a prototype carbon neutral hotel, the first on the island of Menorca and an important milestone for the group within the framework of its environmental strategy. To this end, the hotel incorporates state-of-the-art facilities and technologies that will enable it to reduce its Scope 1 and 2 emissions by 87%. In addition, the hotel will explore alternatives to offset the remaining emissions and thus ensure its full carbon neutrality (net zero), contributing to the Company's decarbonisation objectives.

Villa Le Blanc is a dream come true for our company," said Gabriel Escarrer, Vice President and CEO of MHI, "because a project like this one, which allows us to move forward on the path of hotel decarbonisation, and in a place as special as Menorca, a Biosphere Reserve, is the most tangible result of the strategic commitment that Meliá is making to promote a hotel model based on excellence, responsibility and sustainability.